This weekend, we were riffing about soup sleeves at lunch.

(Soup sleeves are sleeves that you’ve accidentally dunked in your soup. It came up because Katt used the term to warn the guy about a potential sleeve-in-food situation.)

I remarked that Soup Sleeves would be a good name for a restaurant.

The guy (who is seven) urged me to open that restaurant for real.

I replied that I’d need several years to get ready to do that.

The guy was concerned that I would forget and not actually follow up on opening the restaurant. He asked me to set a reminder to open the restaurant in five years. 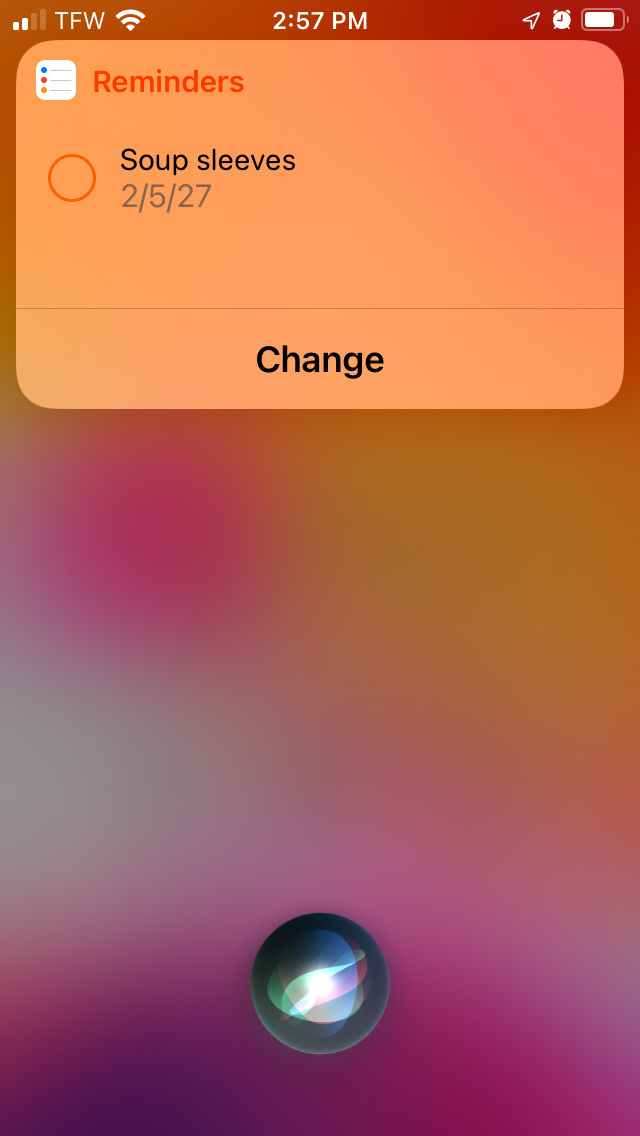 This reminder was weird to see because I’ve never set a reminder for that far in the future. I do have some reminders in my Fastmail calendar for a year or so from now.

But the year 2027 just looks way further in the future.

With the reminder on-screen, the guy said that he was now sure I wouldn’t forget to open Soup Sleeves in five years.

I replied with the caveat that I probably wouldn’t have this phone by 2027. (And most likely, I won’t be using Apple services.)

I started by saying that I could lose my phone in the next five years. Or I could drop it, and it could break, and they’re hard to repair.

The guy followed up with “What if you’re careful, and you don’t lose or break it?”

Now we were going to have to head into Unsatisfying Explanation territory.

I fished around and came up with this:

He was silent for a moment, maybe because he was thinking about it or because it was a really boring and confusing thing that I just said.

Personally, I found what I had just said bewildering and ridiculous. It’s senseless that we all have to use phone software that continually increases its resource demands so that we have to get new phones every two years. As an adult, I am ashamed of myself and other adults for participating in this.

Onward through the depths of time

Undeterred, the guy asked how far in the future we could set a reminder.

I tried setting a reminder for 50 years in the future. The Reminders app accepted it. 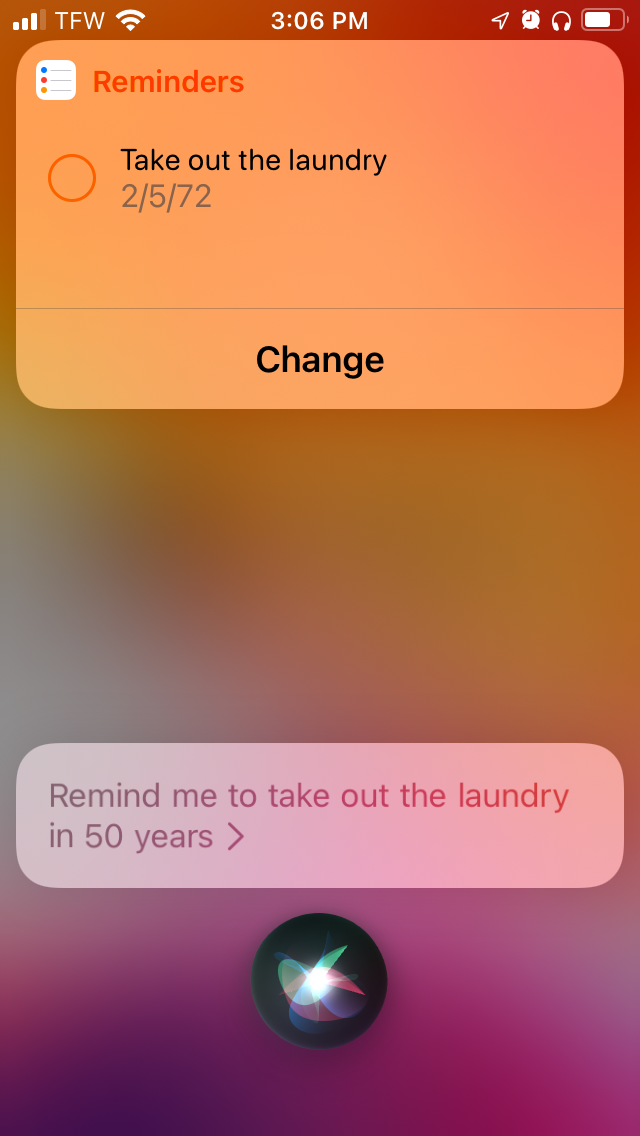 Again, it was strange to see such a high date value. It was so high that I initially parsed it as in the past, as 1972. Then, after getting the century straight, it seemed bizarrely optimistic.

Emboldened, we decided to set a reminder 1,000 years in the future. The guy noted that we’d both be dead at that point, but we decided we were still going to go ahead with the reminder.

I requested a reminder, half-expecting it to be rejected. 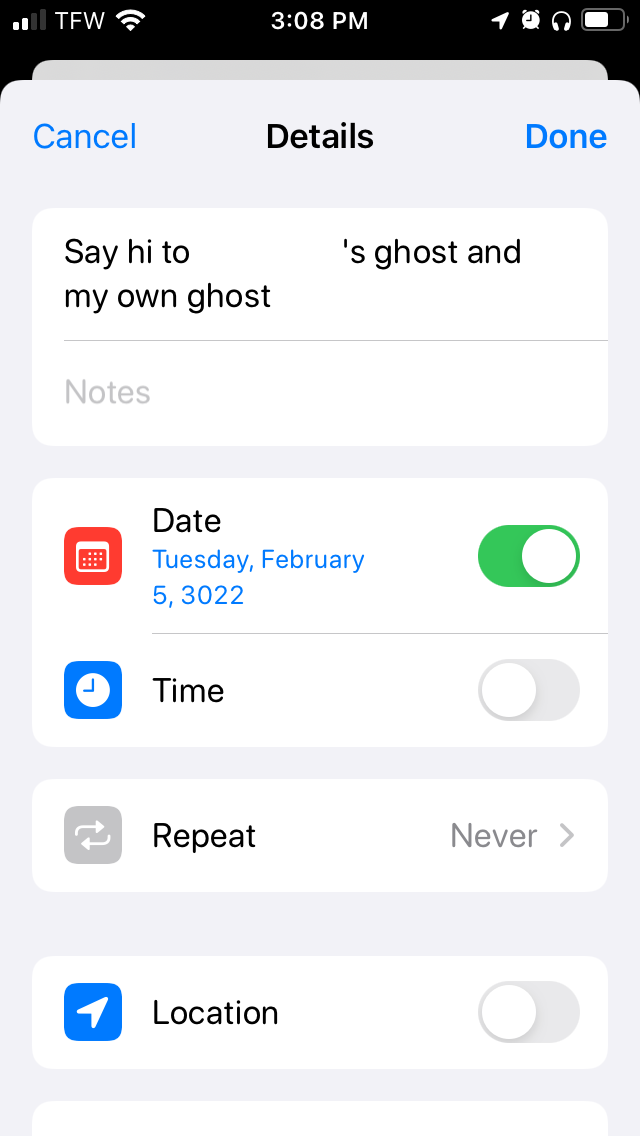 But no, it dutifully put it into some database, then gave us a confirmation!

(I don’t actually know who is going to be saying hi to our ghosts here. Maybe whoever ends up finding the reminder?) 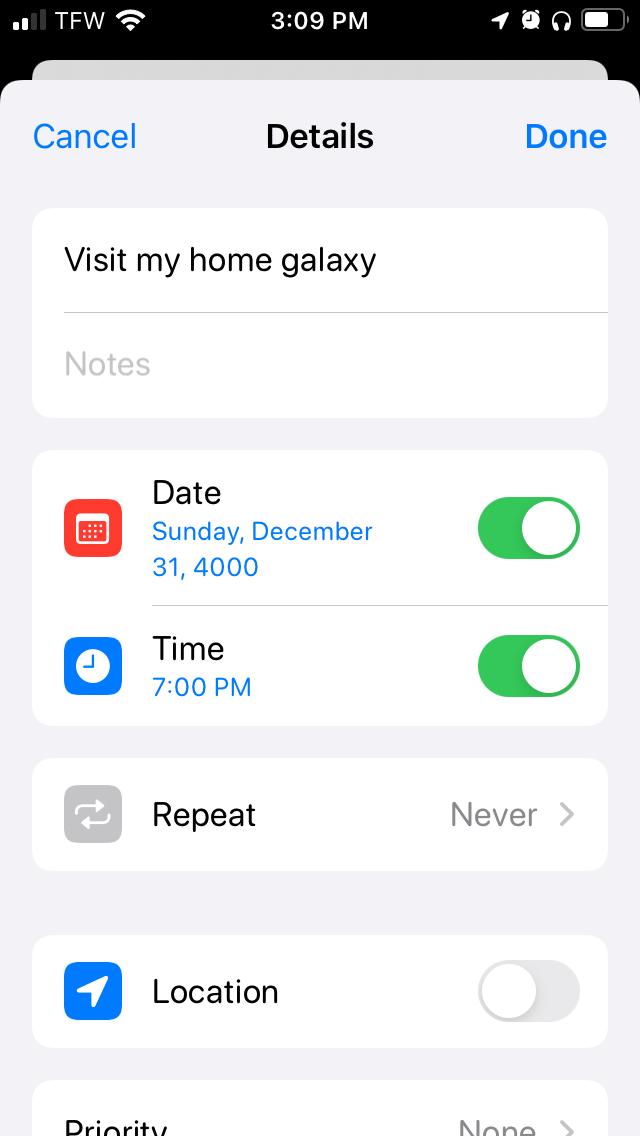 We discovered that there was indeed a limit to the app’s optimism. That limit was the last day of the year 4000.

So, our reminder was knocked back to December 31, 4000. Still, that’s really far in the future, on a smartphone time scale. (Though not that far in the greater scheme of things.)

I’m not sure what I thought the situation would be in the year 4000 (or the year 12000, which is when I hoped this reminder would land). Maybe at that point, our ghosts will be able to do intergalactic travel at meaningful speeds? Or perhaps a random being will find it and experience it as a Jenny Holzer-style art piece.

If this actually worked

What if you really could count on automated reminders far into the future, though? I guess we could scale back down to decades in the future, rather than millennia, for the purposes of this question. 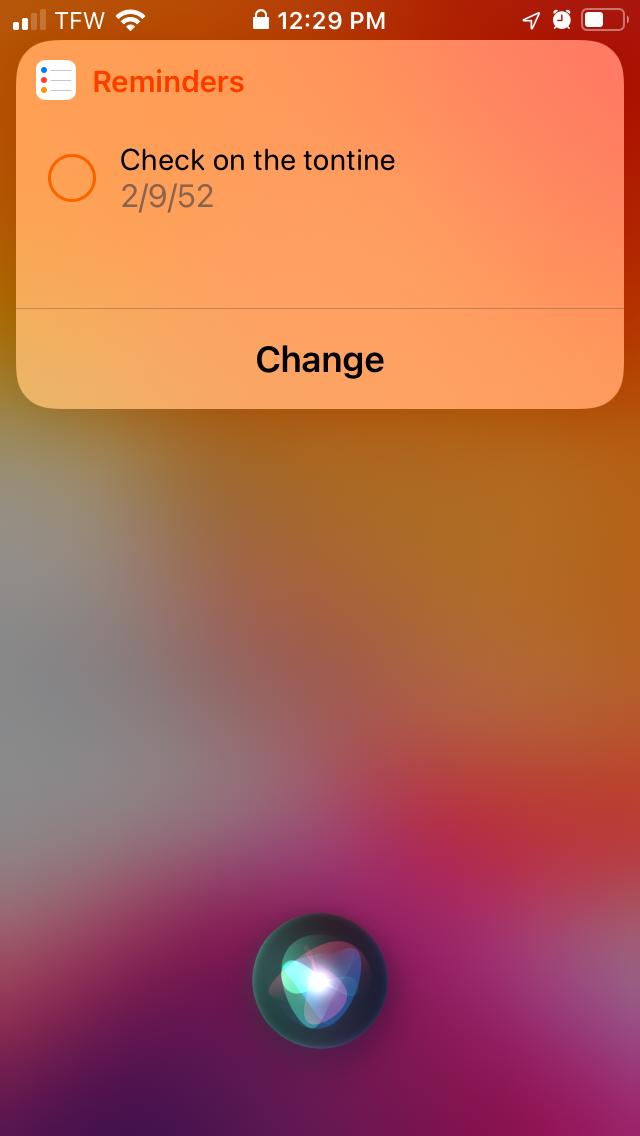 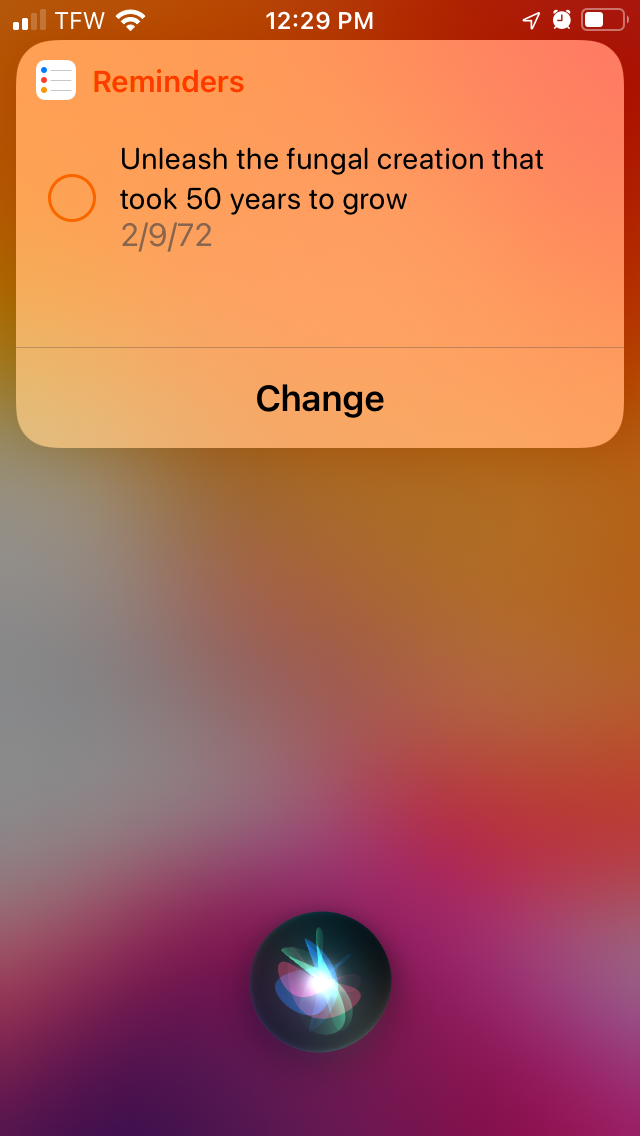 These reminders would be very useful — if things pan out exactly as you imagine they will.

Things can change unpredictably in decades. Your tontine could be invalidated by a heist. Your massive fungal network could be killed by toxins emitted by a rival fungal network.

Because of that unpredictability, though, it is extra nice when something actually is predictable on that time scale. If you had reliable long-term reminders, you would be able to think, maybe I can’t count on my fungal network being there, but I can count on getting the reminder about it.

I think this little bit of predictability counts for something.

Unpredictability creates stress because your brain has to constantly re-evaluate a situation instead of just assessing it once, then moving on to other matters. So, the more predictability we can create in our lives (outside of art), the better.

Corporations can’t deliver this for us. At a mechanical level, they don’t have the motivation to provide long-term anything. As has been discussed everywhere lately, investment creates incentives to capture monopolies and plan for the short term.

So, if we’re going to have this, it’s going to have to come from elsewhere. Maybe some form of the 50-year computer could provide our long-term reminders.

I hope we do find a way to do reliable long-term reminders somehow. The launch of Soup Sleeves depends on it. 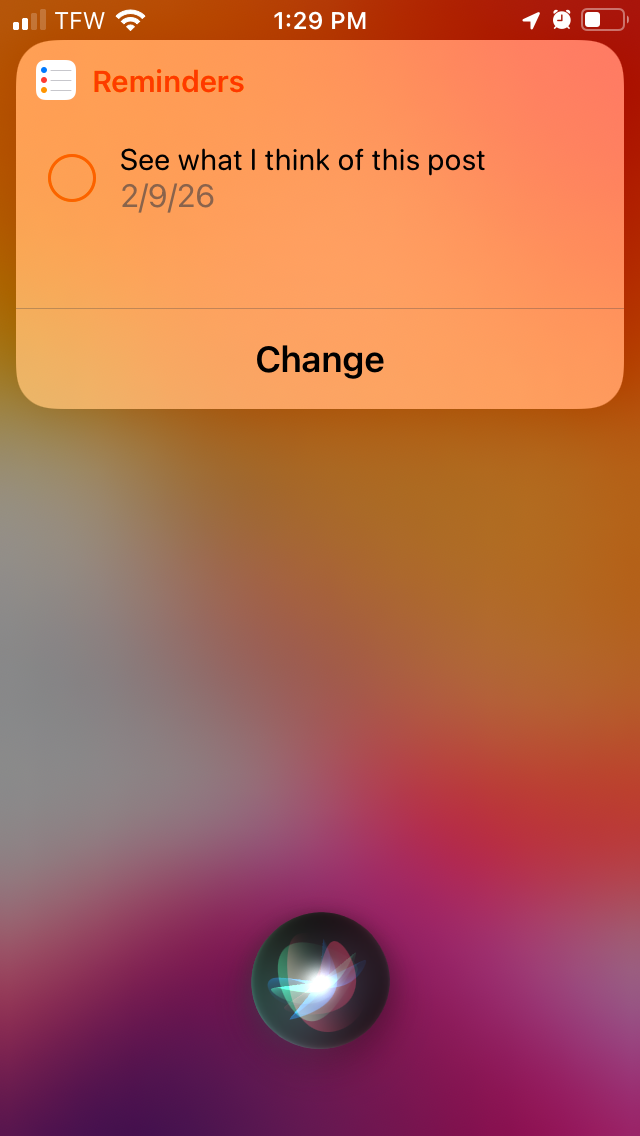