Hello. I hope you’re doing OK, despite Conditions. If you’re in the mood, I have some tiny bits of art progress to tell you about!

I finished a painting. It’s a revision of a painting from three years ago. 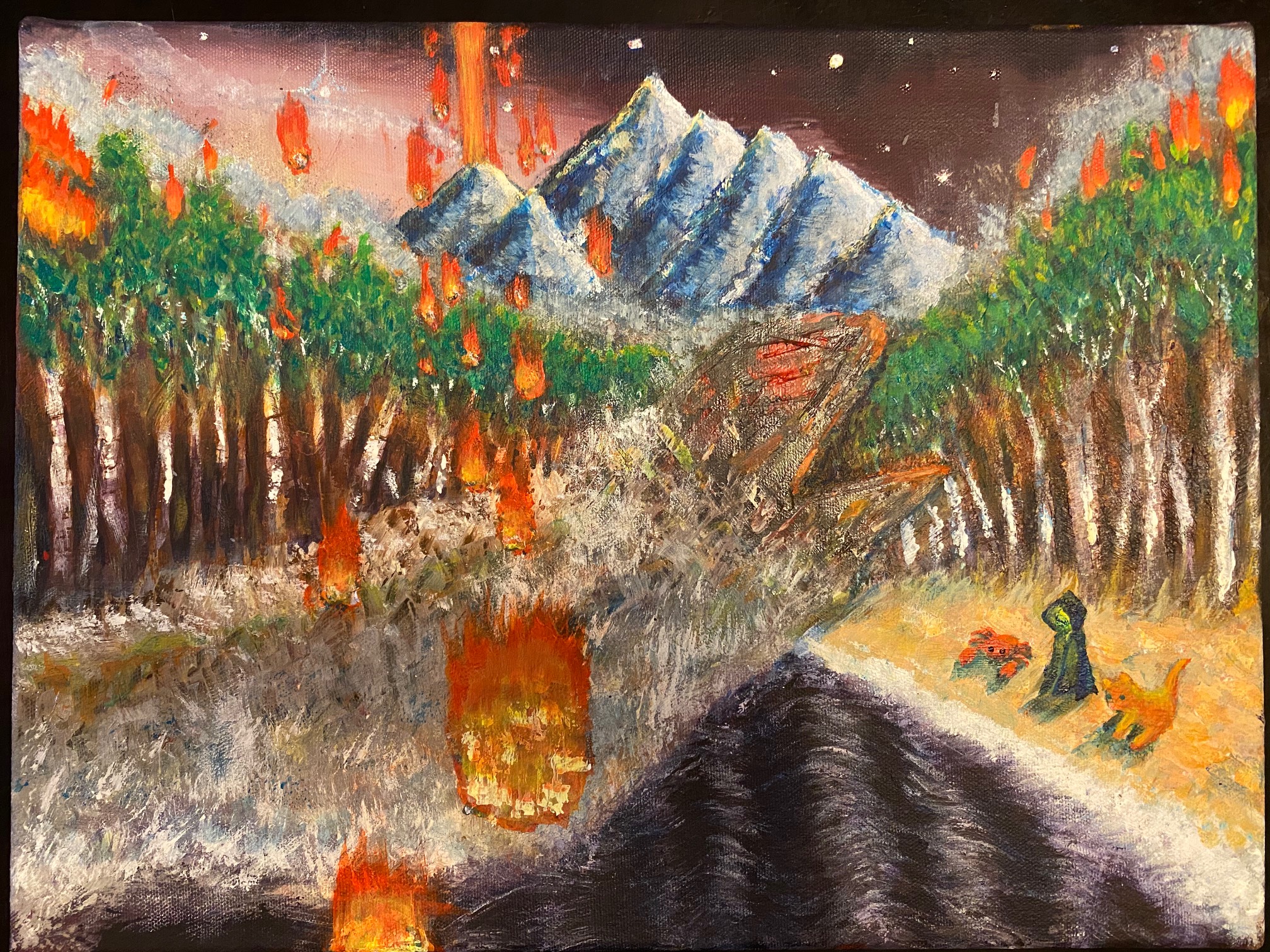 I went into this knowing that I could very well ruin it. I wanted to challenge myself to not be afraid of ruining it).

I did, in fact, learn about a lot of lines I could cross and jump back over again. Unwanted changes can be undone by:

Many Photoshop tools have an origin in painting, I think.

There are things you can’t walk back, though. If you paint something over a nice gradient, and you decide you don’t want at that something after a certain amount of time has passed, you might not be able to scrub it off completely. And repainting a nice gradient is daunting. For me, they kind of just happen to land a certain way, and I can’t do the same gradient twice.

There’s also only so many layers you can scrape back.

I wrecked the crispness of the mountains, and I never got the tephra exploding out of the volcano to look right. They’re like Mario fireballs. But, at least I know how to depict Mario fireballs now.

I am happy with the beach and the waves, though, and that took many passes. The tree trunks are what I think worked out best. Crabs aren’t too hard to paint, which is good to find out.

The composition evolved instead of being designed up front. That felt good and helped this to remain a reliable stress relief activity. If I had planned it, though, I might have made it more flat and tapestry-like, which is perhaps a better fit for the events depicted.

Using the paint left on the palette at the end of a couple of sessions, I also painted these little paintings. 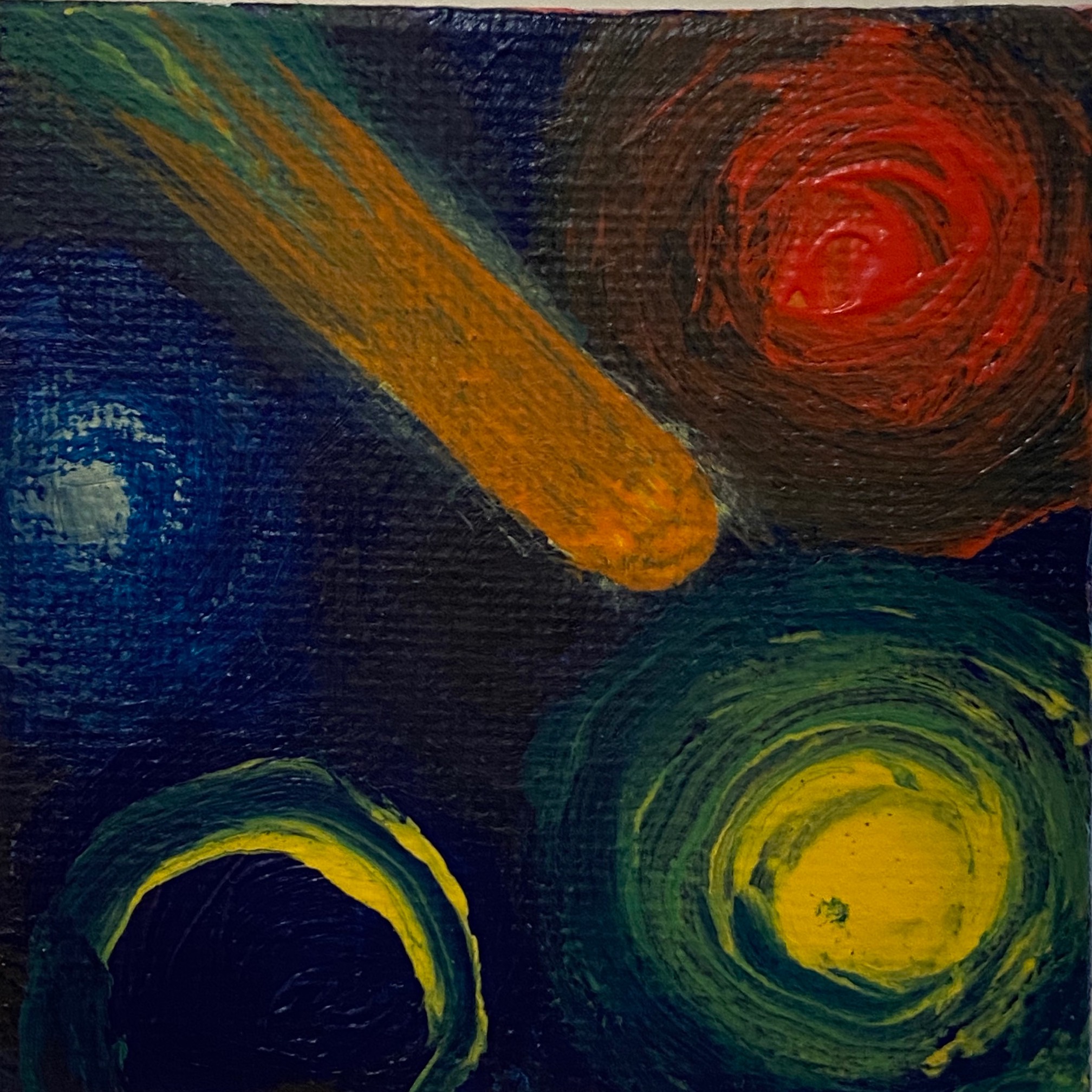 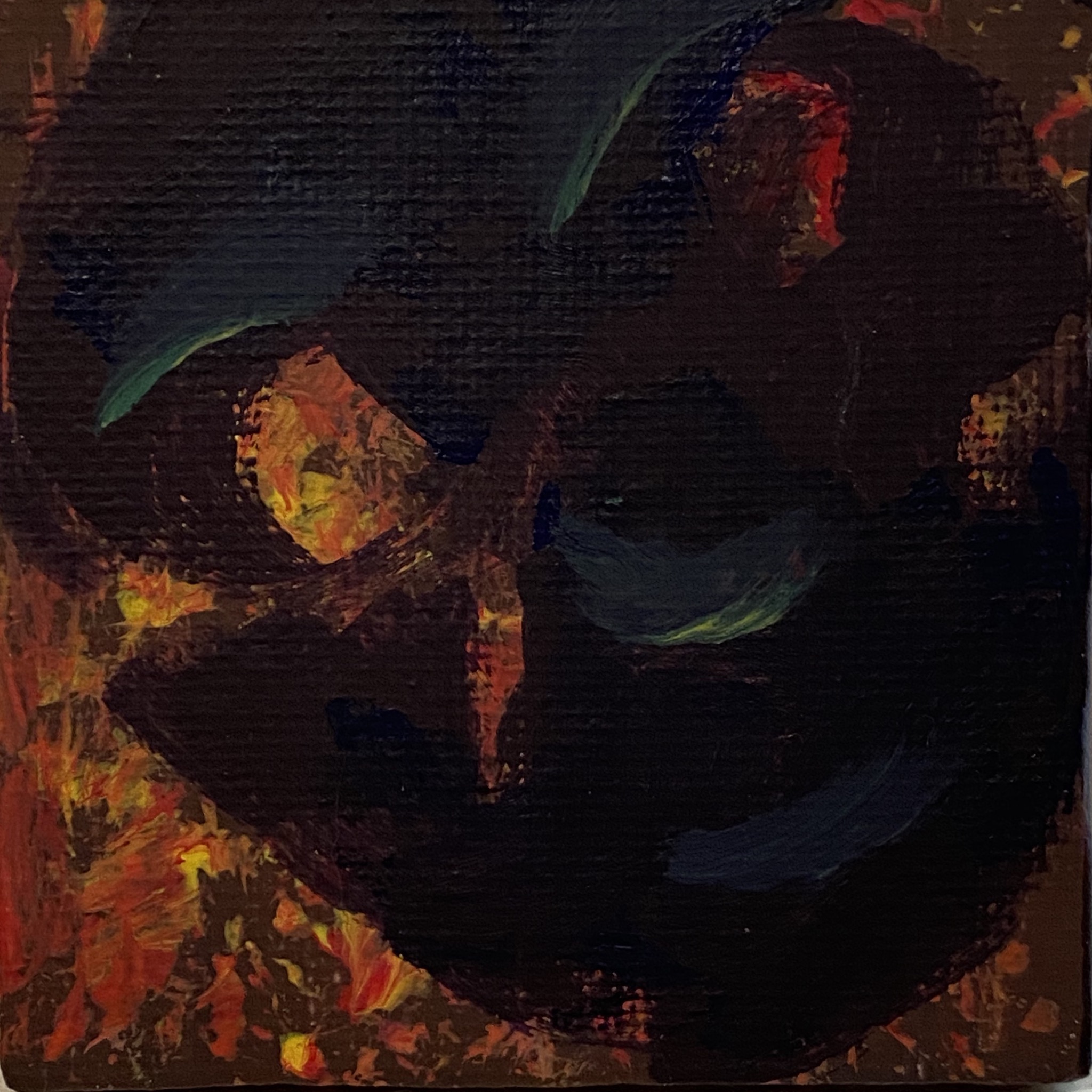 You know a song’s going to be good when it’s introduced as a theme song for a group of NPCs that have appeared twice in someone’s D&D game.

With that said, here is that very song:

The Red Union of Bears March

The NPCs (non-player characters) are, unlike the PCs (the charaters played by actual players), a well-funded group of adventurers. (If you’ve ever played in the AD&D Forgotten Realms campaign setting, they’re much like the Harpers.) Here’s how I described it my email to the players in the game:

As part of the celebration, one of the paid organizers commissioned a local hot dog salesman/composer to arrange their theme into a march. The Quenchport Community Orchestra played it at the celebration, which according to the organizers, was a success.

Via NanoStudio 2 (a mobile app), I got some really nice orchestral virtual instruments for about $20. Many of the more percussive instruments sound extremely authentic, and the others can be very convincing when arranged in ensemble. Back around 2004, I remember downloading a comparable collection of virtual instruments. I downloaded the cracked version because it cost about $500 to get a legitimate copy. (Here’s a couple of pieces I used them in, in case you’re wondering: Passacaglia, Empty City)

After rolling some timpani under trumpet and trombone blats, I imagined myself shaping my silly theme into a really powerful orchestral piece. My ambition inflated. At some point, I aspired to a Mars, Bringer of War or Star Wars kind of power. (R. is really into John Williams, so we’ve been listening to a lot of Star Wars and Jurassic Park lately.)

I didn’t get there. Instead, I verified that, yes, it is indeed hard to arrange for ten different parts. There’s a lot to think about, and every change is potentially a lot of rethinking and relistening. There was a particular piercing brass punch that I wanted that I didn’t quite reach. Also, I’ve never really worked on singing on pitch, so these were rather challenging vocals for me. Luckily, Katt agreed to get in the mix, and individual vocal accuracy matters a lot less in group vocals.

I scaled down from simulating a brilliant professional orchestra to simulating a community orchestra or an eager high school orchestra. The piece is more fun this way, and now, despite knowing how involved they are, orchestral pieces seem within my reach.

Speaking of feeling like you can make music, I’ve been recording songs R.’s been writing lately. And I wrote about songwriting and subservience in my personal life newsletter.

Since I last emailed you, I’ve put up five more episodes of the podcast.

I really tried to stick to posting a new episode every Monday, but it overwhelmed me. I am forced to admit that I can’t just take whatever notes I wrote that week and just read them out, which was the dream. There’s a big gulf between notes that have down what I want to remember and what is actually readable when read out loud, so I end up having to do quite a bit of script writing and additional research.

And then, I started to accumulate subject matter so tragic that I didn’t know how to present it respectfully. Talking about a topic like Ahmaud Arbery requires far more consideration than topics like making pizzas. You also have to be more careful and accurate when talking about police murdering people (or really, anyone murdering people).

These issues, plus audio issues, caused a full-month gap between Episode 7 and Episode 8.

Episode 9 came more easily. It has live segments! My friend Alex and I crossed a weird bridge that we saw the week before. It was surprisingly disturbing. We also sent to the top of a massive parking garage, which turned out to be an interesting place.

With the help of my friends Toby and Wayne, who are really good at usability and rendering intricate details in CSS, I put together a very specific tool: Emojipress

It’s for stamping out those blue-gray square emoji that have text in them. They’re sort of like the candy hearts of emoji. They are specifically shiny and puffy, like everything was during peak Apple around 2012 or so.

If you happened to want to add a bunch of these to some Slack, there you go!

Other than that, I’ve been fixing stuff that’s broken. Observatory busted after a GitHub API change. That reminded me that I forgot to figure out what I was going to do with it. My cloud instance’s HD filled up, and I was forced to move on my plans to restructure the way my bots, particularly the image bots, work. Right now, they’re as simple as possible and that means generating content on the cloud instance and storing it there as well.

Going forward, I’m going to be doing as much as I can from the Raspberry Pi at home and the gigantic HD connected to it. From there, I’m going to back up the HD to a cheap S3-like bucket (Digital Ocean Spaces) on the Internet. This way, I won’t run out of space on my cloud instance, and I’ll always I have a backup.

I’m hoping to rely on the cloud instance as little as possible. I want it mostly to just serve assets with nginx.

Unfortunately, most of my bots generate images by taking screenshots of web pages using a headless browser. After spending a few calendar days trying to build Chromium for an ARMv7 processor (so I could run headless Chromium on the Pi), I gave up.

So, the bots on the Pi get a little help from the cloud instance via Snapper, a service that takes screenshots of web pages for clients.

There are various solutions offered by Netlify and AWS that I could use instead of this approach. Due to the way business works (acquisitions, sunsetting, deprecating), I could imagine having to do multiple migrations over the next few decades if I built on those. The only thing I’d bet on being around in ten years is Unix, so I’m trying to avoid getting too much fancier than that.